Film Review: Seriously Red is an easy crowd-pleaser that gets by on its inspirational-quote mentality 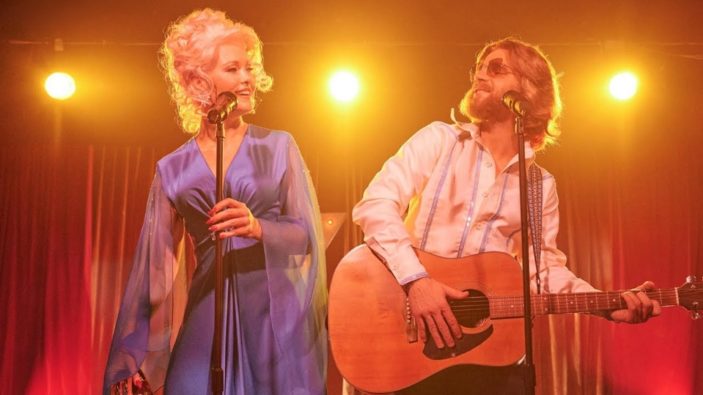 Though Seriously Red is a film that has its heart in the right place and explores the rather fascinating world of celebrity impersonators and, by extension, what that does to one’s own identity, Gracie Otto‘s musically-inclined comedy never quite digs deep enough regarding its thematics.

Otto’s film centres itself around Raylene “Red” Delaney (Krew Boylan, the film’s writer and go-for-broke heart), a property adjuster who isn’t very good at the technical aspects of her job, but finds the joy in meeting new people and learning of their stories.  Red feels much more at ease when she gets to let loose and dress up as her idol, Dolly Parton.  And because she thinks her work place’s awards ceremony is a fancy dress event, she rocks up as Dolly, accepts the “clown award” from her sniggering co-workers (Todd Lasance has a small supporting turn as her fed-up, questionably endowed boss), and performs a cover of “9 To 5” to take back their jeers and, momentarily, win them over.

Prior to her Parton performance, the event was overseen by an Elvis impersonator (Rose Byrne, also serving as the film’s executive producer), and said manager, Teeth (Celeste Barber, further proving her ease as a comedienne), takes a liking to Red, so much so that she offers her the chance to audition for the company she scouts for.  At first Red makes it clear that this is more a hobby and a light escape, but when she loses her job – or quits, depending on which form of events you follow – she takes Teeth up on her offer; and yes, there is a particularly bizarre backstory as to why her name is Teeth.

Up to this point, Seriously Red has travelled at a relatively predictable pace, but it’s offered enough decent giggles and there’s a general sense of enthusiasm peppered throughout.  It’s a shame then that it loses this steam when Red scores the gig as Dolly and learns she’ll be touring alongside a Kenny Rogers impersonator (Daniel Webber).  It’s not that this narrative aspect isn’t interesting though, it’s that its exploration of what it is to be an impersonator and live “as” that person – Kenny and Red live together as a couple, always in character – never feels as expansive as it should.  It’s an entirely fascinating concept, and whilst we can see Red struggling with this concept as she notes Kenny’s displeasure at her trying to find out who he truly is, or how her mother (Jean Kittson) and best friend (a very sweet Thomas Campbell) vehemently disapprove, the psychological aspect is disregarded, and by the time “Elvis” talks Red down and serves up some harsh truths and worthy comments about identity and how much easier it is for a woman “playing” a woman, it’s too late for a relationship that hasn’t been given the time to develop on screen.

It’s finding the balance of its comedic and dramatic aspects that Seriously Red has the most trouble maintaining.  There’s two films of worth here – one of Red embracing who she is through the whimsy and strength of Dolly Parton, the other investigating the world of impersonators and what that means to one’s identity – and though both are lightly flirted with, it never learns how to streamline them.  Of course, that doesn’t mean Seriously Red isn’t without its charm.  Boylan’s a firecracker of a performer, she genuinely shines when she’s dolled up (pun intended), and the moments she plays off both Barber and Bobby Cannavale (wonderfully unapproachable as Barber’s employer) prove the film’s most enjoyable.  Likely to be a crowd pleaser and easily digested by those that enjoy Parton’s music and undemanding comedy, Seriously Red hopes it can get by on its inspirational-quote mentality enough to disguise the fact that it’s more surface level than it should be.

TWO AND A HALF STARS (OUT OF FIVE)

Seriously Red is screening in Australian theatres from November 24th, 2022.

More to Explore on the AU:

What Is A Dual Diagnosis Outpatient Treatment Program?

How to Create a Culture of Excellence in Remote Worki Teams

How to Create a Culture of Excellence in Remote Worki Teams

How To Transfer Ethereum From Coinbase To MetaMask Wallet

WHY YOU SHOULD GATHER NEW FRIENDS AFTER 50

The Biggest Lesson I’ve Learned From You

5 Acting Techniques for Greater Stage Presence in Your Public Speaking

Is Your Passion Showing? — How to Get Audiences to Believe In You

Want to Stop Making Impulsive Decisions? Do This Instead

7 Tips For Caregivers To Ensure A Quality Life For Elderly

Weekly Horoscope December 5-11, 2022 From The AstroTwins

Is Your Passion Showing? — How to Get Audiences to Believe In You

Want to Stop Making Impulsive Decisions? Do This Instead

7 Tips For Caregivers To Ensure A Quality Life For Elderly

Weekly Horoscope December 5-11, 2022 From The AstroTwins

No Result
View All Result