Has Your Path in Life Meandered? Why It’s Okay to Take the Nonlinear Route 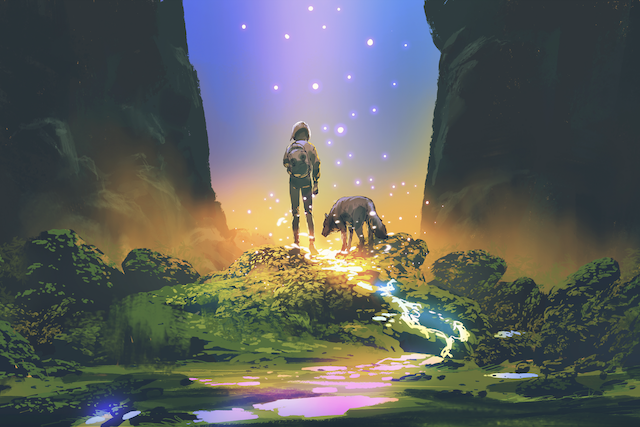 “Even when we think we have things figured out and everything is going to plan, it can all change in a moment. Inspiration fades. Beliefs transform. Goals shift. Life happens. And that’s the thing. Life is not linear.” ~Aly Juma

I was maybe around nine years old. My dad and I were working with orange play-doh in the shed next to the garage that we used for arts and crafts. Dioramas stood on either side of us—one with an underwater scene from The Magic School Bus, the other a solar system complete with styrofoam planets. Through the window the wind rustled our wooden swing-set.

Taking the play-doh in my hands, I blobbed it into the shape of a hill.

“It’s the hill between us and Aunt Maria,” I announced to my dad as it took form.

Earlier that day we’d visited my aunt and cousins, who lived in a town that required crossing a tunnel through the hills to get to.

My dad helped me carve out the tunnel. Then we chiseled the winding roads that seemed to coil up and down from one side of the hill to the other.

I realized we’d never been up on those roads. I was curious to know if cars could drive across them, so I asked my dad. He told me they could.

“Why don’t we ever?” I wondered aloud.

It seemed like it would be fun—going up, down, and around all those curves. I wondered what we might see along the way. I wondered if it would feel like a Disneyland ride.

“It’s very pretty up there,” my dad said. “But going through the tunnel gets you there much more quickly.”

As I got older, I realized I liked taking the hillier route in life.

Those who had their mind made up seemed to zoom through a tunnel. My more meandering route looked quite different.

My life after graduating from college included moving to Uruguay for a year, taking a job in social work upon returning, then driving Lyft for two and a half years before becoming a Spanish interpreter. I had a lot of time to write, practice my hobbies, and figure out my next move during this stretch of time.

The Lyft driving in particular was a move that some might have seen as aimless and unambitious. Yet it felt like the best option for me then—a point in time when, with unresolved issues to heal, I needed freedom, flexibility, and control. Few other jobs offered those things.

I enjoyed riding the wave of adventure wherever it took me.

One time, after delivering flowers to an Uber Eats client in the Outer Sunset neighborhood of San Francisco on a rare sunny day, I went for a glorious barefoot jog along the beach.

Another time I ended up at a cafe in Turlock where tables were barrels, next to windows that peered out at a street that looked plucked from the 1800s.

Still another time I found myself at a storybook cafe attached to jacuzzis that cafe-goers could rent for an hour.

When people asked, “Why would you want to drive Lyft?” or “Why would you want to live that lifestyle?”, small moments like these made up part of my answer. The freedom in my schedule (part of the independent contractor lifestyle) allowed them to happen. I learned to be a treasurer of beauty in random places and unexpected moments.

Sometimes unanticipated events can derail even our best laid plans. There are so many things we can’t control, and practicing flexibility can help soften the blow of this.

Let’s say I’d planned to give a couple of quick rides before ending at a cafe to study for my Spanish interpreting test—but then a passenger requested a ride that was longer than I’d anticipated. In order to still meet the studying need, I’d translate passengers’ conversations into Spanish in my head.

I also joined 24 Hour Fitness so that no matter where I ended up, a workout facility would never be too far out of range. (Whichever was closest by the end of my last ride was the one I’d work out at.)

I was reminded that there are multiple paths to meeting our needs. To not wall myself off to doing this in unconventional or creative ways. The more adamant you are about the “hows,” the likelier you’ll be to neglect meeting them altogether. I learned to choose instead to satisfy them in a perhaps less conventional (albeit un-ideal) way.

When we aren’t flexible, we become victims to our circumstances. This can lead to learned helplessness.

For anyone who’s still not quite sure where their life is headed, or feels like they’re trekking the hilly meandering route:

You don’t need to immediately—or ever—commit yourself to the rat race. Sometimes you just don’t know what’s right for you. And it’s okay to take time to figure it out.

I’ve learned that we don’t need to be the car shooting straight through the tunnel. The tunnel may be the quickest, most straightforward commute. But there are so many ways to arrive at your ultimate destination. Our route can be like the alternative, unexplored roads over the hills.

Keep listening to your intuition until it takes you where you need to be. Maybe your path is to keep moving, until eventually you arrive at your wiser end goal. And maybe once on it, you won’t look back—because no one forced you onto it. You arrived there on your own. It happened when it was supposed to.

And if your ultimate goal is to aimlessly and hedonistically, that’s okay too. There’s no wrong path in life—just what feels right to you.

A freelance writer and Spanish interpreter, Eleni was raised and currently resides in the California Bay Area. Her work has been published in Them, LGBTQ Nation Tiny Buddha, The Mighty, Elephant Journal, The Gay and Lesbian Review, and Introvert, Dear among others. She currently writes the monthly column “Queer Girl Q&A” for Out Front Magazine. You can follow her on IG @eleni_steph_writer and on Medium.

See a typo or inaccuracy? Please contact us so we can fix it!

This is Why Diversity in the Workplace Is Important

These Are the Most Loved Fictional Teachers, Study Finds

WHY YOU SHOULD GATHER NEW FRIENDS AFTER 50

The Biggest Lesson I’ve Learned From You

5 Acting Techniques for Greater Stage Presence in Your Public Speaking

How to Become a Better Leader Through Writing

Marcus Aurelius Quotes and Sayings from His Book Meditations

HAVE WE GONE TOO FAR WITH SELF-LOVE?

How to Become a Better Leader Through Writing

Marcus Aurelius Quotes and Sayings from His Book Meditations

HAVE WE GONE TOO FAR WITH SELF-LOVE?

No Result
View All Result